On Sunday the 12th August, Anne and Ivan Clunes were present at St. Augustines Church for a special blessing by Fr. Gayan, in celebration for their 60th Wedding Anniversary. 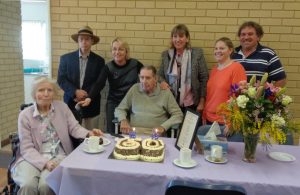 A plaque was also presented by Fr. Gayan in thanks from St. Augustines for all Ivan and Anne’s hard work and generosity over the years, with parishioners extending their thanks and congratulations by many handshakes and hugs.  After Mass a morning tea was held in the Parish Centre at which family and friends were invited to partake of delicious cakes and savouries.

He first met Ivan in 1956 when he was lucky enough to receive an invitation to the opening of B.P. in Kwinana, and during this meeting a group of Refinery workmen entered and sat in the back row, with Ivan being one of them.  Kevin’s brother-in-law was a Fireman at B.P. introduced Ivan to Kevin who was farming at East Rockingham. From then on, they used to hear this second-hand jeep passing with a friendly toot.  It was Ivan.  It then progressed to a friendly toot with a blonde, sitting next to him with hair blowing in the wind… the blonde being Anne of course.  Ivan was a member of the farmer’s union so contact was made again.

In the following years Ivan was a great worker for the extension of St. Josephs school and organiser for the start of the new Church Programme.  He was known for being the boss when it came to dismantling the old Presbytery, the old church and old toilet block.

Anne came out from England approximately 1956.  After their marriage they lived on the farm with Anne working hard with bringing in the cows and feeding all the calves besides all the housework.  When guests were invited they were treated with the true English spread with table laid to the finest detail.  She was one of the early volunteers with Maria Capriotti who cleaned the church which in those days had polished floor boards. 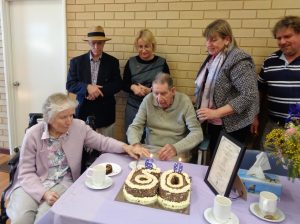 Kevin thanked them once again for their participation in the Parish community.  Daughter Meryn thanked Kevin for his kind words, thanking her Mum and Dad in raising their family through the good and bad times.  They were all together for the day which was a blessing.  She thanked Kevin and Irene Stokes for the work they had put in in organising the day.

Ray Oliver put in a few words.  He said whenever he met Ivan he would say “Hello Ivan, how are you today?”, and Ivan would reply “I’m grumpy!”.

David and Jennifer Miller, appreciated workers employed on the Clune’s farm, were also able to attend.  Anne keeps in good health and is now a resident of Pam Corker House, whilst Ivan still resides in his home on the farm, with help from the community. 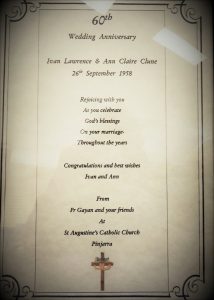 of your servants Ivan and Anne,